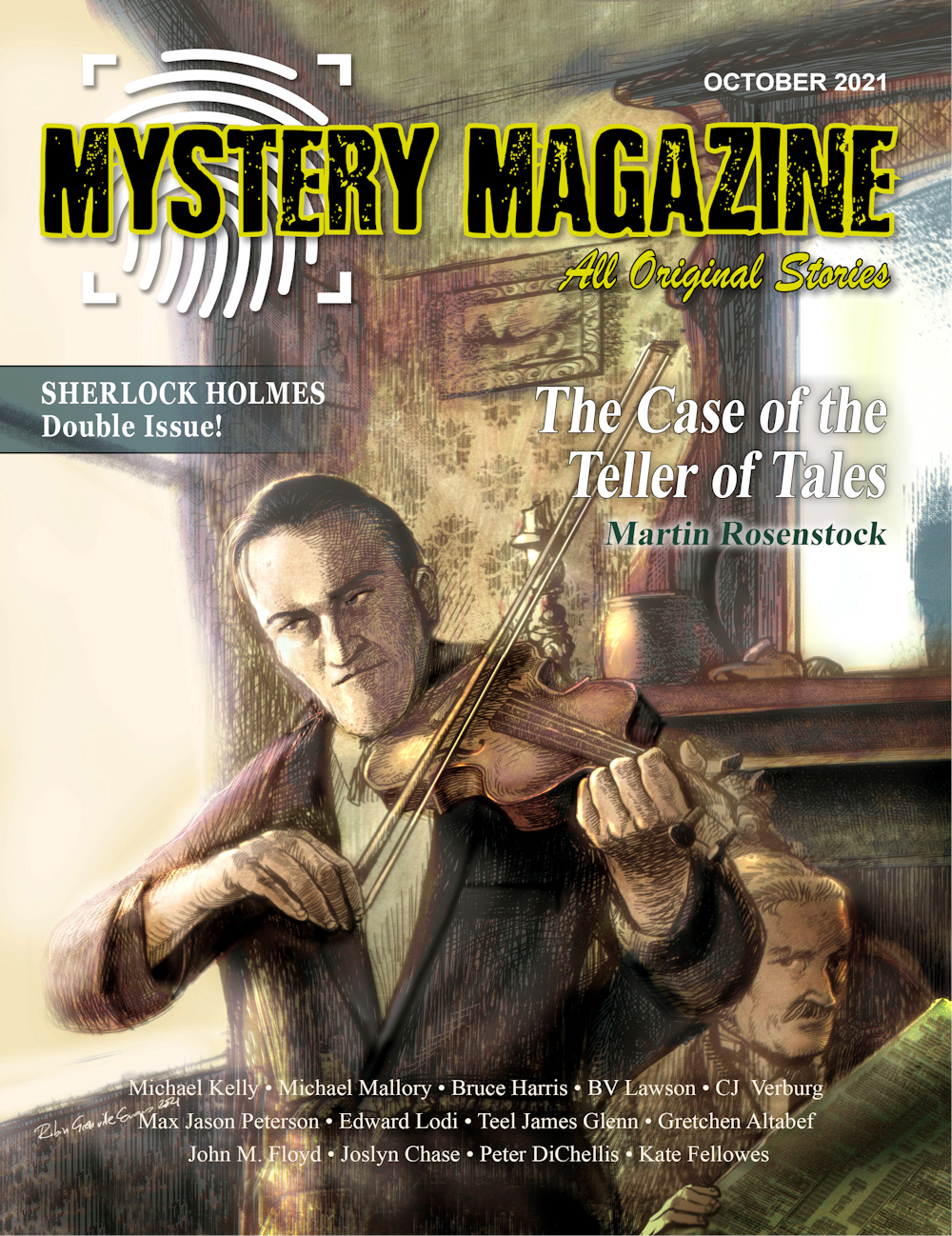 Again and again I rushed after his guilty coat tails, only to uncover his underlings offered as sacrifice, on his false trails the dead men’s bones crunched beneath my feet. Yet, he knew exactly where I lived. Every light I shined into his malevolence went up in smoke, an illusion created by an expert. At last I seized a single thread and followed it through a thousand cunning windings to him. Then I lured him here and offered myself as bait.

Gretchen Altabef, In The Land of the Living, Mystery Magazine, 2021.

Minutes after defeating Moriarty at the Reichenbach Fall, Sherlock Holmes realizes he is being hunted. His journey to freedom results in the rescuing of a boy who is the key to international peace.

The stories we feature in our monthly issues span every imaginable subgenre, including cozy, police procedural, noir, whodunit, supernatural, hardboiled, humor, and historical mysteries. Evocative writing and a compelling story are the only certainty.

Get ready to be surprised, challenged, and entertained–whether you enjoy the style of the Golden Age of mystery (e.g., Arthur Conan Doyle, Agatha Christie), the glorious pulp digests of the early twentieth century (e.g., Dashiell Hammett, Raymond Chandler), or contemporary masters of mystery.

In this issue:  “In The Land of The Living” by Gretchen Altabef, a “Great Hiatus” story. Sherlock Holmes escapes from the Reichenbach Fall to brave the Alpine heights and be summoned to a rescue in Tibet, where no Englishman could go.

I am incredibly grateful to Mystery Magazine for the inclusion of my story in this Sherlock Holmes issue. And for doing what it does best, promoting mystery authors. Mystery presents it’s short stories in pristine wall to wall format. There’s nothing to distract the reader from the stories. Thank you.

Gretchen Altabef is an MX author of Sherlock Holmes novels. Her writing springs from the same sense of justice as Dr. Watson’s, and Dr. Doyle’s. Ms. Altabef’s novels brim with imagination and a news reporter’s excitement for the true history of the day. The first, These Scattered Houses, is in Holmes’ own voice and resourcefully chronicles the last two months of his ‘great hiatus’. From a review by Harry DeMaio: “Let us establish one fact immediately. Gretchen Altabef is a remarkably talented author. In These Scattered Houses, she eschews the formulas that so often appear in Holmes pastiches and sets about creating a new format; a new locale; new characters; a new storyline and most important, a new Holmes.” The sequel is Remarkable Power of Stimulus. After 3 years away, Sherlock Holmes finds London awash in murders, No. 221B besieged, anarchists threatening Paris, and most arresting of all, the return of Irene Adler. Fully aware he is under surveillance by Moriarty’s men, Holmes arrives in Baker Street knowing he will find Watson’s friendship and unerring aim are as dependable as the British Rail. The Sherlock Holmes Journal 2021 review: “a boldly portrayed Holmes…Exciting, ingenious, and a delight to read. I hope it will attract the modern generation to our Holmes and Watson.”

I am an MX author of new Sherlock Holmes novels. My writing springs from the same sense of justice as Dr. Watson’s, and Dr. Doyle’s. My books brim with imagination and a news reporter’s excitement for the true history of the day. THESE SCATTERED HOUSES. A breakthrough novel for Holmes and for me, an historical murder mystery solved as only Holmes can. The sequel, Sherlock Holmes: REMARKABLE POWER OF STIMULUS is a Sherlock Holmes novel with heart. “In The Land of the Living” Mystery Magazine, October 2021. “Sir Arthur and the Time Machine” SHERLOCK HOLMES FURTHER ADVENTURES IN THE REALMS OF H. G. WELLS, Belanger Anthology. I am both a contributor of Doyle’s, and Holmes’ history, and an editor of JEREMY BRETT – PLAYING A PART and JEREMY BRETT IS SHERLOCK HOLMES by Maureen Whittaker. A member of the Sherlock Holmes Society of London, The John H. Watson Society, the Priory Scholars of New York, the ACD Society, the Sherlock Holmes Society of India, Sisters in Crime, and the Dumpster Divers of Philadelphia artist collective. "Yes, I have taken to living by my wits". - Dr. Watson (MUSG). View all posts by Gretchen Altabef

2 thoughts on “In The Land of the Living”