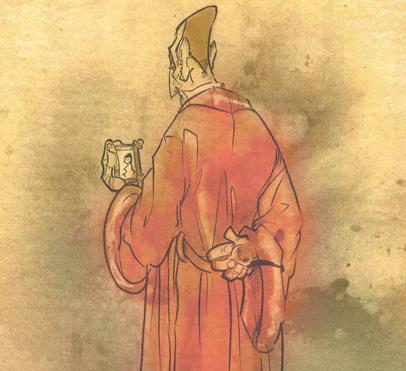 “There is no better way to defeat the enemy than with his own weapon.”
“You’re Crazy.”
“Eccentric.”
“It’s the same thing!”

This is a book of wonders, especially Petr Kopl’s illustrations, and most especially his portrayal of Holmes. He takes us through the story choosing just the right scenes to show it to perfection, engage our attention, and carry us along with a certain degree of zany surrealist eccentricity. My favourite is Holmes and Watson’s meeting at Baker Street, just before the King arrives. The sequence of images one more remarkable than the next, the comic banter, and build up to its final frame. Laughing so hard, I had to stop and pick myself up off the floor after “traditional.” Though extremely difficult to choose from a books worth of museum quality paintings, my favourite image is the one I’ve chosen for this review. The brilliant inside cover image of Holmes with his back to us in his dressing gown. He holds Irene’s photo.

This is the first retelling of “A Scandal in Bohemia” where I actually understood how well Irene Adler bested Sherlock Holmes. Mr. Kopl knows these characters well, and how they speak, interact with each other, and we are the happy benefactors of his knowledge, skill, and humour. Don’t wait, order all of his graphic novels, and allow his spectacular world to enlighten you in the best possible way.

With style and understanding the Holmes and Watson interchanges sparkle with all the facets of the Blue Carbuncle. There are many worthy jokes and quite a few unexpected guest appearances. In Mr. Kopl’s enormous imagination there is a thin veil between the alternate universes of books where characters can move through with ease.

Don’t miss Mr. Kopl’s article “Sherlock Holmes & Sex” in the Bonuses section in the back of the book. It handles a much debated subject well and adds another dimension to the graphic novel. My novel Remarkable Power of Stimulus, releasing November 2020, is my exploration of the subject. Petr’s conclusions are filled with humour and a dose of reality, which I find extremely refreshing.

And thank you, Petr, for the mask!

I author Sherlock Holmes Novels and emulate Sir Arthur Conan Doyle’s and Dr. John Watson’s literary styles. MX Publishing Author of Sherlock Holmes: THESE SCATTERED HOUSES. A breakthrough novel for Holmes and for me, an historical murder mystery solved as only Holmes can. The sequel, Sherlock Holmes: REMARKABLE POWER OF STIMULUS is a Sherlock Holmes novel with heart. I am both contributor of Sir Arthur Conan Doyle, and Holmes history, and an editor of JEREMY BRETT – PLAYING A PART and JEREMY BRETT IS SHERLOCK HOLMES by Maureen Whittaker. A member of the Sherlock Holmes Society of London, The John H. Watson Society, the Sherlock Holmes Society of India, and the Dumpster Divers of Philadelphia artist collective. "I could not wish anything better than to be associated with my friend in one of those singular adventures which were the normal condition of his existence." - Dr. Watson (TWIS). View all posts by Gretchen Altabef

1 thought on “Petr Kopl’s A Scandal in Bohemia”