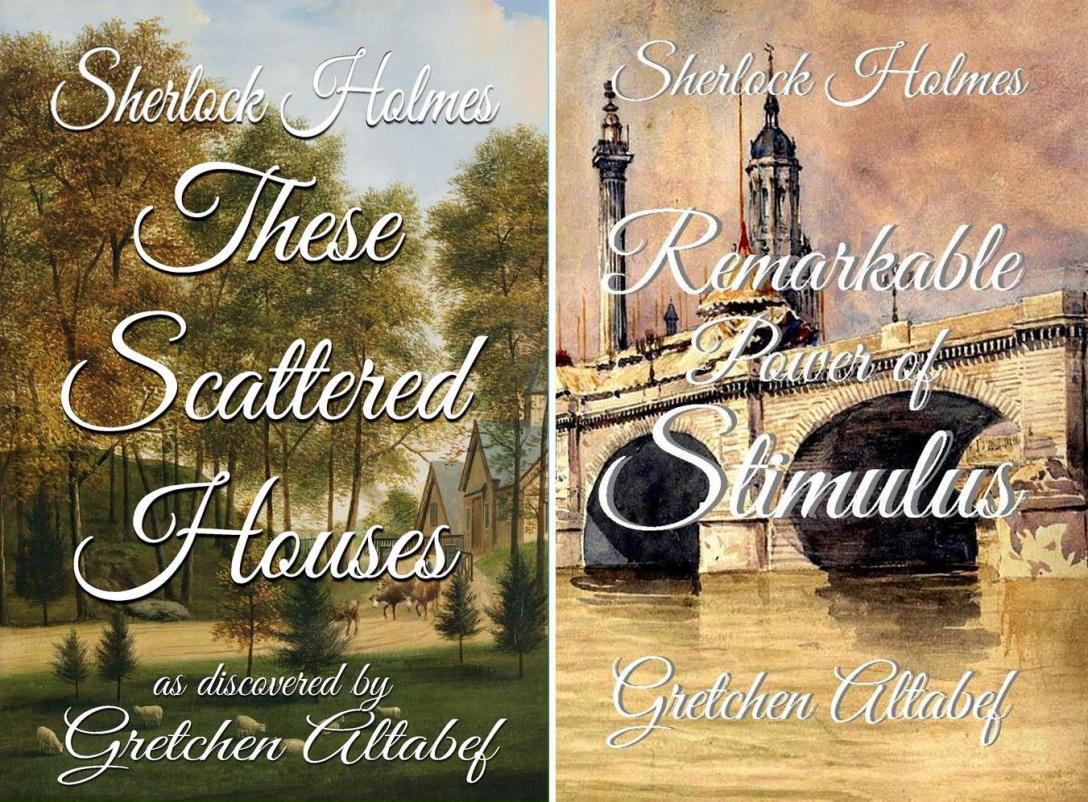 I looked at him anew, with an understanding I never had before and with awe for the magnitude of such a mind. In a flash I understood the cocaine, his moods, and his genius.

MX Publishing has bundled together These Scattered Houses and Remarkable Power of Stimulus. My action packed original story of Holmes alone, in the guise of Sigerson the Explorer and it’s sequel, Sherlock Holmes’ cinematic return to London. The first though written in my highly visual style is much too dark for film. The second, has Holmes and Watson solve in their traditional manner, a hideous series of murders, comparable to Jack the Ripper, and is much more appropriate for the screen.

These Scattered Houses is a pastiche, based on Arthur Conan Doyle’s stories, during Holmes’ great hiatus, and in Poughkeepsie, NY. Without Watson, except for the many letters Holmes writes in his journal. Filled with colorful characters, the story is told completely in Holmes’ voice. Since he is undercover, hunted, and in costume, I’ve subtly included homages to a few famous Holmes portrayals.

Remarkable Power of Stimulus is a pastiche, also based on Arthur Conan Doyle’s stories, which takes place in London. It bookends Doyle’s story, “The Adventure of the Empty House” (which takes place over a single day.) What happens the very next day brings Watson and Holmes together again at No. 221B Baker Street. New characters enliven the story. Here, as in Doyle’s stories, London is a living, breathing character. Holmes and Watson conquer the horror that imperils the English suffragettes in a story that takes them back and forth across the River Thames, into South London, Oxford, St. Bart’s, and beyond. Holmes in Paris is confronted by a city in fear and ruin. Historically, this was the beginning of the arch anarchists who in six years time brought the world to its knees. A feat which was thankfully never equaled. One man was there, one exceptionally intelligent and remarkably prepared gentleman for whom justice was as familiar as his partner’s precise and unerring aim.

I am an award-winning MX author of new Sherlock Holmes novels. My writing springs from the same sense of justice as Dr. Watson’s, and Dr. Doyle’s. My books brim with imagination and a news reporter’s excitement for the true history of the day. THE KEYS OF DEATH is the genesis story of the world’s most famous address, No. 221B Baker Street. THESE SCATTERED HOUSES. A breakthrough novel for Holmes and for me. My novels are historical murder mysteries solved as only Holmes can. The sequel, REMARKABLE POWER OF STIMULUS is a Sherlock Holmes novel with heart. “In The Land of the Living” Mystery Magazine, October 2021. “Sir Arthur and the Time Machine” SHERLOCK HOLMES FURTHER ADVENTURES IN THE REALMS OF H. G. WELLS, Belanger Anthology. I contributed the history of Arthur Conan Doyle and Sherlock Holmes, and edited JEREMY BRETT – PLAYING A PART and JEREMY BRETT IS SHERLOCK HOLMES by Maureen Whittaker. A member of the Sherlock Holmes Society of London, The Adventuresses of Sherlock Holmes, The John H. Watson Society, the Priory Scholars of New York, the ACD Society, the Sherlock Holmes Society of India, Sisters in Crime, and the Dumpster Divers of Philadelphia artist collective. "Yes, I have taken to living by my wits". - Dr. Watson (MUSG). View all posts by Gretchen Altabef

New content delivered directly to your inbox. Be the first to know of games and free offers.