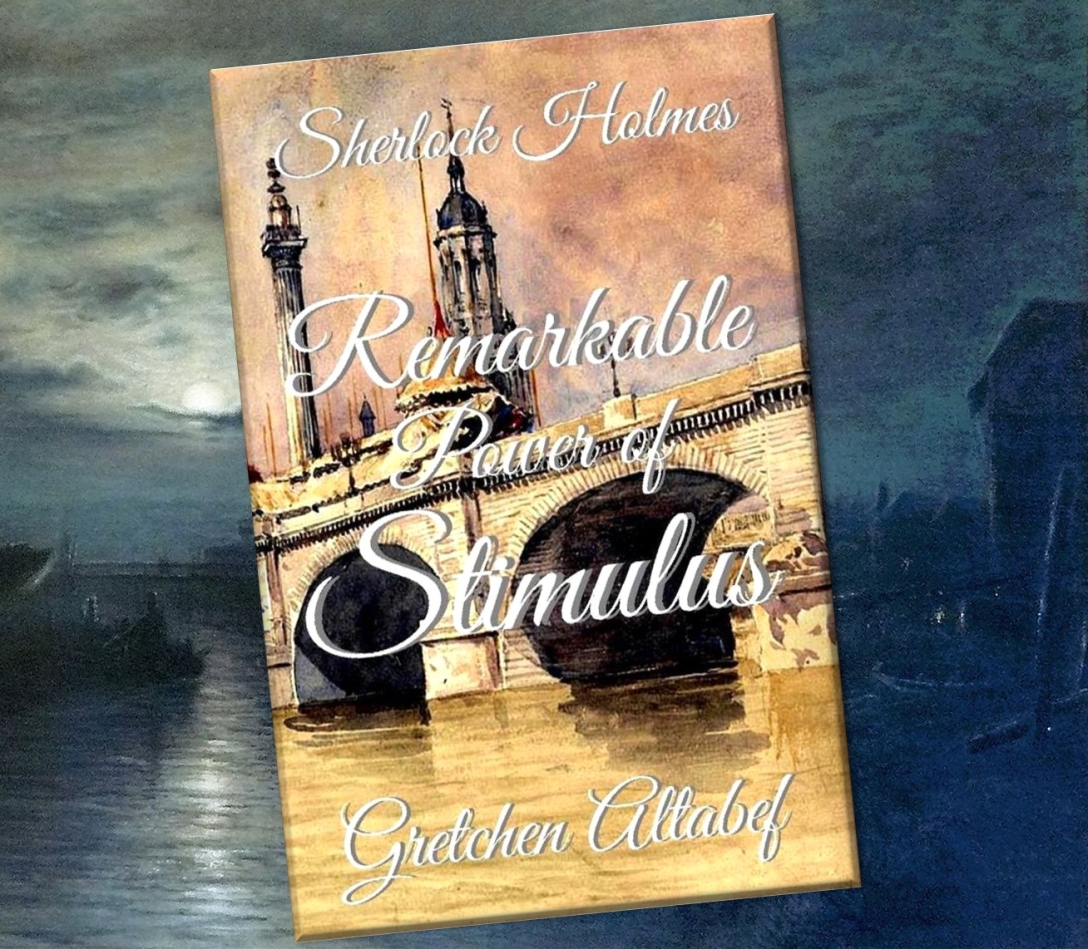 The sequel to These Scattered Houses.

Remarkable Power of Stimulus is a Sherlock Holmes novel with heart. 1894 London is threatened with the most gruesome murder mystery since Jack the Ripper. Paris is imperilled by lethal anarchists upping their game. English suffragists face a deadly foe. Only one man with an unshakable belief in logic, imagination, and truth, can make a difference.

Written from a women’s perspective and history. Holmes returns to his city after three years away knowing that Doctor John H. Watson’s friendship is as dependable as the British Rail. This imaginative story bookends Sir Arthur Conan Doyle’s “The Adventure of the Empty House.” Find out what happens at 221B Baker Street the very next day.

Miss Rachel Marcello, from These Scattered Houses, a new young Inspector Chandra Das, the Baker Street Irregulars, the usual London crew, and some surprises have their parts to play. If you admire the feistiness of the English Suffragists you’ll enjoy this book. We discover what Watson did during Holmes’ hiatus and how it made him even more the partner of Sherlock Holmes. The solving of the murders brings these two gentlemen through a baffling and dangerous chain of events culminating in a sinister and cinematic climax.

Craig Stephen Copland, author of New Sherlock Holmes Mysteries: “Of the hundreds of Sherlock Holmes, pastiche mysteries available . . . very few can match this book for a depth of historical research and a heart-stopping thrill of a story. The plot builds through incident after dangerous incident, culminating with a frantic climax. A great read.” These Scattered Houses.

The Sherlock Holmes Journal review by Mark Mower, author of Baker Street Legacy: “A gripping and colourful adventure. . . Clear respect for the Canon is demonstrated in the many neat references and affectionate nods to the characters.” These Scattered Houses.

Wendy Heyman-Marsaw, author – Memoirs from Mrs. Hudson’s Kitchen: “Rarely does a pastiche capture so many elements of an original Sherlock Holmes story as Ms, Altabef’s These Scattered Houses . . . a story of pursuit and deliverance that is reminiscent of the The Sign of Four. . . A riveting climax.” These Scattered Houses.

I author Sherlock Holmes Novels and emulate Sir Arthur Conan Doyle’s and Dr. John Watson’s literary styles. MX Publishing Author of Sherlock Holmes: THESE SCATTERED HOUSES. A breakthrough novel for Holmes and for me, an historical murder mystery solved as only Holmes can. The sequel, Sherlock Holmes: REMARKABLE POWER OF STIMULUS is a Sherlock Holmes novel with heart. I am both contributor of Sir Arthur Conan Doyle, and Holmes history, and an editor of JEREMY BRETT – PLAYING A PART and JEREMY BRETT IS SHERLOCK HOLMES by Maureen Whittaker. A member of the Sherlock Holmes Society of London, The John H. Watson Society, the Sherlock Holmes Society of India, and the Dumpster Divers of Philadelphia artist collective. "I could not wish anything better than to be associated with my friend in one of those singular adventures which were the normal condition of his existence." - Dr. Watson (TWIS). View all posts by Gretchen Altabef